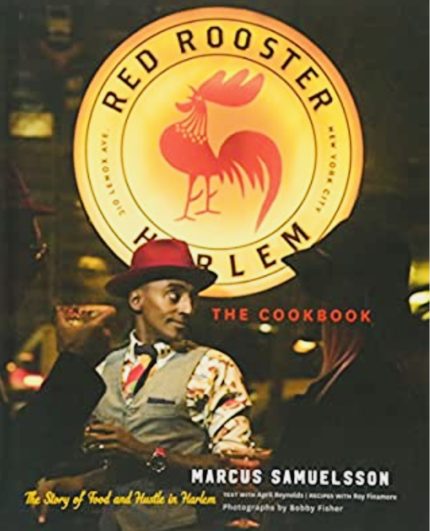 Chef Marcus Samuelsson | The Red Rooster Cookbook: The Story of Food in Harlem

When the James Beard Award-winning chef Marcus Samuelsson opened Red Rooster on Malcom X Boulevard in Harlem, he envisioned more than a restaurant.  It would be the heart of his neighborhood and a meet-and-greet for both the downtown and the uptown sets, serving Southern black and cross-cultural food.  It would reflect Harlem’s history.  Ever since the 1930’s, Harlem has been a magnet for more than a million African Americans, a melting pot for Spanish, African, and Caribbean immigrants, and a mecca for artists.

These traditions converge on Rooster’s menu and he is sharing some of his top favorites in this cookbook.  Interspersed with lyrical essays that convey the flavor of the place and stunning archival and contemporary photos, The Red Rooster Cookbook is as layered as its inheritance.

“Samuelson’s unorthodox Red Rooster Cookbook is a literary love letter to Harlem…he goes beyond recipes to write an ode to the neighborhood – and the people, places, and problems in it-that made him.”

“While Harlem has long occupied a mythical place in the American imagination, it is also a place where human beings live, work, raise and educate their children, and revitalization of Harlem is one of the most important social and economic developments of this generation, and the role of cultural institutions is central to that process.  To a list including the Studio Museum and the Schomburg Center, one must add the Red Rooster, which has rapidly become the gathering place for the cultural glitterati, where conversation and music are nourished by Marcus’s  sublime cuisine.  Who would have thought that Ethiopia and Sweden (Marcus’s heritage) and the American South would meet on a menu in Harlem?”